Ladies and Gentlemen, welcome back to the Grassy Gnoll!

Sorry for the slight delay in updates, it’s been a hectic time over the last week, and I had some new stuff on the go that took a while to get organised. I think the wait was worth it though, and I’m ready to unveil what I’ve been working on. So I’ve got something a bit different for you all today. As part of my reboot, for want of a better term, of the blog, I decided to start doing some interviews with authors, designers and pretty much anyone who’ll agree to answer my questions.

Note: In the interests of honesty, I’ll just say that this actually isn’t my first interview, but since it’s related to a Kickstarter project, and is therefore time sensitive, I’ve pushed publication of that one back until the weekend… Sorry Wendy, I hope you don’t mind! I promise it’ll go up as soon as it can.

Today I’ll be posting some questions that Timothy S. Brannan, the author and lead designer of Strange Brew: The Ultimate Witch & Warlock, has been kind enough to answer. Tim is a long time gamer, and the author of the Liber Mysterium, a third party sourcebook for D&D 3.0 that was released back in 2002. A lot of the Liber Mysterium’s content is being updated for Pathfinder as part of the Strange Brew project. You can find the Kickstarter page for this project here: 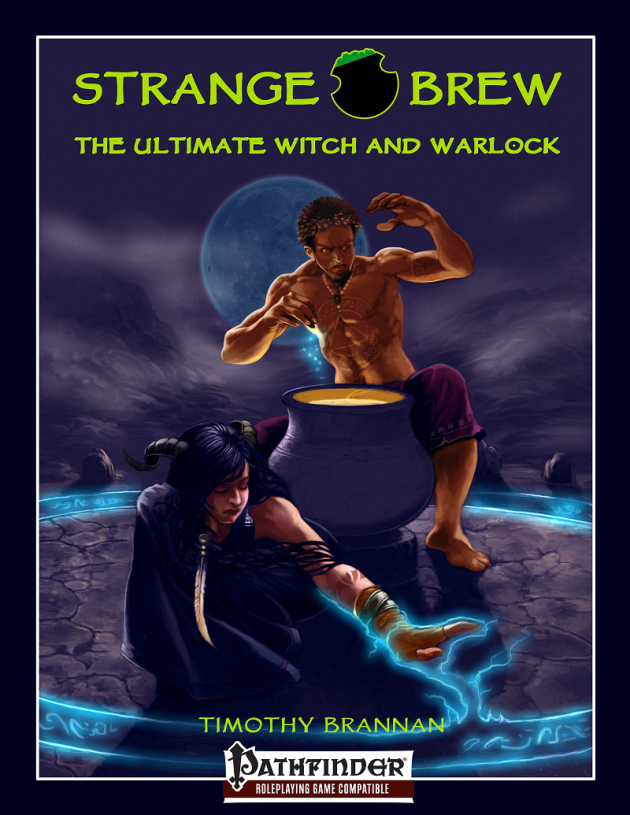 Before we get started though, I’d like to thank Tim for taking the time to answer these questions, and giving us some insight into his history as a gamer and designer, and what he has in store for Pathfinder players who want more options for their witches and warlocks. I’d also like to thank Christina Stiles, who is coordinating the project, for being so open to the idea of my interviewing the people involved, and helping to make this happen.

The Grassy Gnoll: How and when did you first start playing tabletop RPGs?
Tim Brannan: I started back in 1979. I had borrowed a friend’s 1st Ed AD&D Monster Manual to read one afternoon and I was blown away.  There were all these monsters I knew from mythology, but there were also all these stats with them.  I then got my hands on a badly Xeroxed copy of Holmes Basic and learned from that.  I had no clue what I was doing, but I was having fun.  I later got my own copy of the Moldvay Basic set and the 35+ year love affair began.

TGG: Which systems have you played over the years? Do you have a personal favourite?
TB: Lots, but I tend towards horror and Victorian games. I have played all editions of D&D and the D&D clones.  Chill, Call of Cthulhu, both versions of the World of Darkness, Victoriana, Conspiracy X, Alternity Dark Matter, GURPS, Kult, Mutants & Masterminds, Marvel Super Heroes, Doctor Who, Star Frontiers, Star Trek (multiple versions), and Traveller.  My favorite though is Eden Studio’s WitchCraft game.  WitchCraft is by far the best game I have played.  So much so that my own Ghosts of Albion from Eden is just an attempt by me recreate the fun of WitchCraft.

TGG: Are you primarily the GM for games you’re involved in, or do you prefer to be a player?
TB: I run two games for my kids, so I tend to GM.  I am also playing in a game now, so I have been splitting my time more between the two.   In High School I was more of a player, in College more of a GM. I enjoy both to be honest. Though I think I prefer to run games.

TGG: How did you get involved in RPG Design?
TB: Almost as soon as I picked up a copy of a D&D book! I was always a fan of tinkering with the system as it were.  Back then computers were also a new thing so if you wanted to do something you had to do it yourself.  That translated over into my game design with me writing my own adventures, creating monsters and new classes.  My first new class was “The Healer”.  Followed up rather quickly with a “Death Priest” and then the “Witch”.  You can still see fragments of DNA from all three in my current witch classes.

TGG: Strange Brew: The Ultimate Witch & Warlock is clearly a labour of love for you. You released Liber Mysterium, a source book for Dungeons & Dragons 3.0 in 2002, much of the content of which is being updated and rewritten for Strange Brew. What is it about witches that have caught your imagination so strongly?
TB: In Liber I have quotes about witches for each chapter. In the Introduction the quote is “What is it with you and witches anyway?” and that is from my mom.  I have always loved the class and the archetype.  It isn’t that the class is missing from the rules; a case can be made either way, but it was missing from my games.  My first witch class was nothing more than a magic-user with some cleric spells, but I loved her. She was so cool.

TGG: Pathfinder already has a Witch class for characters. What are your thoughts on it? Do you think it’s a reasonable representation of the concept of a witch, or is it too narrow for your liking?
TB: The Pathfinder Witch has a lot going for it.  I love the Hexes and Patrons. I had done something similar with Occult Powers and Patrons in Liber.  But there are some things I don’t like.  The covens, a central part of all witch lore, are poorly implemented in Pathfinder.  Plus there are really not a lot of good options if you wanted to play a Good aligned witch.

TGG: So who are your favorite witches?
TB: For a fantasy game like D&D/Pathfinder I love Morgan Le Fey. Not just the classical versions, but also the Mists of Avalon version as well.  A strong, powerful archetype.  I am also rather fond of Circe. For modern witches I am still a fan of Willow and Tara. But really, there isn’t a witch I don’t like.

TGG: How does your Witch differ from the existing class? Is it a completely separate class, or a set of alternative class abilities and options?
TB: We are calling this book the Ultimate Witch and Warlock for a reason. We are including the Pathfinder witch, but also an alternate witch that is almost a complete class.  The main mechanical differences are the Pathfinder is and Intelligence based spell caster and my witch is a Wisdom based spell caster.  We are also including a new Warlock class.

TGG: The title of the project mentions Warlocks as well as Witches. Is the Warlock a separate class, or merely the descriptive term for a male Witch? If it is a separate class, does it share any similarities to D&D’s Warlock, which was a blaster-style class focused on invocations that allowed it to use a limited number of arcane abilities, as well as an at-will “eldritch blast” ranged attack (as opposed to the Vancian casting system used by the Wizard)?
TB: Yes. We are including a warlock, but since the various D&D warlocks are not Open in terms of the OGL*, we can use them.  That is fine since I wasn’t a big fan of the 3.5 warlock.  There are some similarities though. The Warlock is a short-cut to arcane power in my mind, so the class represents that.  He does have a blast of arcane power he can use as an attack, but he also can cast spells from the Witch’s spell list.  In fact we are calling the combined list Witch & Warlock Spells.  This gives the warlock more flexibility I feel.  Also I am working on a “Spell Theft” mechanic for the warlock that should make him feared by any wizard.  These guys are hated for a reason. We are still working out some of the details of the warlock. So somethings might change between here and the final product.

TGG: I realise it might be a bit of a difficult question to answer, but what part of this project are you most excited about?
TB: Wow. Is saying “all of it” a cop-out?  Mostly I think I am looking forward to integrating all my notes and writings and OGC material into a large cohesive whole.

TGG: Do you have any concerns about getting the project through development and published? You’re an experienced designer, and are working with a good team, but are there any potential pitfalls you can think of? Have you got management plans for if problems should arise?
TB: Well right now everything is written.  So we have that working for us.  But it needs a lot of careful editing.  Not just to get it down to the amount we need, but also to make sure everything is working together well.  Some things I have to change and have been keeping notes on the years I have been running a witch character. Those will need to be considered as well.  The warlock might change between here and publication.  Still working out the details on that.

TGG: That about covers it I think, so last question, and this is possibly the most vital one, from my point of view anyway. Music is a huge part of my life, so I always like to ask other people about it. Who would you say is your favourite artist? Is there anything you’d really recommend that I or anyone reading this have a listen to?
TB: Wow. I listen to a lot of music, but among my favorites are Frank Zappa, any classic rock like Led Zeppelin, the Who, and so on. Love Pink Floyd and Beatles. But I have to say that when working on a project like this there is only one thing I listen too to get my creative juices going.  When writing anything about the witch I HAVE to put in Stevie Nicks.  Yes it is clichéd, but it is also true.

* Editor’s Note: The OGL (Open Gaming License) is the license that identifies what parts of D&D and D20 can and cannot be used by companies other than Wizards of the Coast when designing new products. The Pathfinder RPG is built using the OGL and D&D SRD (System Reference Document) as a framework. All third-party products that wish to be declared Pathfinder Compatible have to comply with both the Pathfinder Compatability License and the OGL.

Well, that about sums it up for this interview. Again, thanks to Tim for taking the time to answer my questions, and I really do encourage you to take a look at the Kickstarter project and support it if you have any interest in Witches and Warlocks in Pathfinder. You can find the link towards the top of this update, or below with a link to the discussion about the project on Paizo.com.

I’ll be back in a couple of days with another Strange Brew related interview, this time with designer Morgan Boehringer, who is not only contributing some exciting stuff to the book, but is also a fellow Australian (Woo! Aussie gamers unite!)

Written while listening to Paul Leonard-Morgan’s OST for Dredd. It’s a masterpiece of a soundtrack, perfectly suited to the film. Has a really gritty industrial feel, with an occasional psychedelic feel to represent characters taking the Slo-Mo drug. Fun fact, the Slo-Mo theme was actually initially inspired by a Justin Bieber song that had been slowed down by some ridiculous amount, until it ended up sounding like some kind of slow choral chanting. To get the actual theme, they recorded a piece of music, slowed it down so much that a few seconds took 10 minutes, then wrote more music to work around it.