Wow. A month between updates… admittedly not the longest break I’ve taken, but not ideal. Especially when I’ve got so much I want to be talking about. Anyway, I’ll hopefully be making another post soon talking about my plans for the blog, so I won’t go into that now. But before I wade into today’s review, there’s something I wanted to mention quickly.

A while ago I got an email from MacMillan Audio asking if I’d like to feature some sample soundclips for the Pathfinder Tales audiobooks on the site. I’m a big fan of the novels, and of audiobooks in general, so of course I said yes… then promptly forgot to actually post them. They’re finally up now, so if you’re interested you can check out samples for (at time of posting) six of the books over on the sidebar. As more become available, I’ll update the playlist. I’m still trying to figure out if there’s a better way to display the player on the site, I want to keep it prominent, but it feels a bit squashed over there in the sidebar. I’ll keep working on it.

And with that done, we can get started on the review of the newest novel in the Pathfinder Tales series (and Wendy, I owe you a huge apology for taking so long with this one). I’m going to try to keep this one a bit shorter than my usual reviews, I think half the reason I take so long between posts is that my usual in-depth reviews take hours upon hours to write.

Full Disclosure: I was provided with an advance copy of this novel by the author for review purposes. This has in no way influenced my opinion of the work, and this review is a full, fair and honest accounting of my thoughts on it. The copy I received is an uncorrected proof, but I doubt there have been any significant changes between what I read and the final publication. 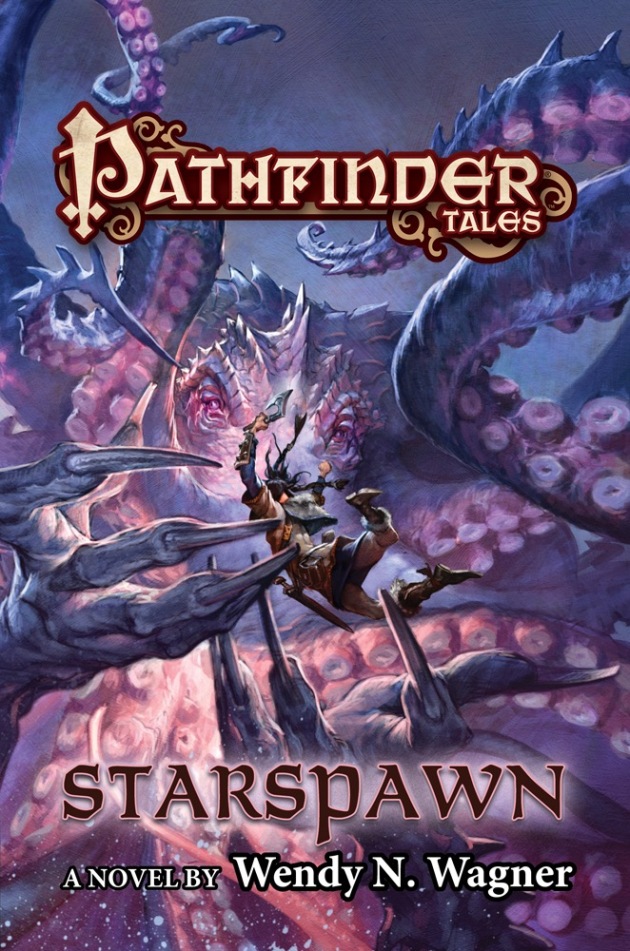 From the Paizo.com blurb:

The Stars Are Wrong

Once a notorious pirate, Jendara has at last returned to the cold northern isles of her birth, ready to settle down and raise her young son. Yet when a mysterious tsunami wracks her island’s shore, she and her fearless crew must sail out to explore the strange island that’s risen from the sea floor. No sooner have they delved into the lost island’s alien structures than they find themselves competing with a monstrous cult eager to complete a dark ritual in those dripping halls. For something beyond all mortal comprehension has been dreaming on the sea floor. And it’s begun to wake up…

From Hugo Award winner Wendy N. Wagner comes a sword-swinging adventure in the tradition of H. P. Lovecraft, set in the award-winning world of the Pathfinder Roleplaying Game.

I’m pretty excited to be reviewing this one. Not only is it bringing one of my favourite settings (Pathfinder’s Golarion) together with Lovecraftian horror, but it’s also the sequel to the first book I ever reviewed on this site, Skinwalkers. Skinwalkers was a favourite of mine, and I’m pleased to say that Starspawn is more than living up to the expectations I had for it. Ms. Wagner has once again managed to craft an exciting and, at least as far as the Pathfinder Tales series goes, unusually dark fantasy thriller. It’s worth noting now that those coming in expecting a true Lovecraft-style horror story are going to be disappointed, in keeping with the heroic fantasy nature of the setting, this is very much a pulp action horror story, closer to a Robert E. Howard mythos tale than a traditional cosmic horror story. This is in no way a bad thing, I’ve got room in my life for all manner of Cthulhu Mythos stories (though I will admit to a somewhat irrational hatred of Brian Lumley’s Titus Crow series), it’s just worth mentioning for the die-hard Lovecraft purists who dislike any suggestion that humanity can do anything but cower before the inevitable doom brought by eldritch horrors.

END_OF_DOCUMENT_TOKEN_TO_BE_REPLACED

Been a busy couple of weeks, but I’ve got some time to sit down and smash this out now, so it’s review time! Today I’ll be talking about the second book in Josh Vogt’s The Cleaners series, The Maids of Wrath. As always, there may be some minor spoilers in the review, but I’ll avoid any major plot points or gigantic twists. On the topic of spoilers though, some fair warning. This is a review of the second book in the series, so in order to discuss it properly, there’s going to have to be some spoilers for the first book. These are not minor spoilers, since the end of that book sets the stage for this story. So with that said, if you haven’t read Enter the Janitor, and are interested in seeing if this series is something you’d enjoy, you can find my review for that here.

Full Disclosure: I was provided with a pre-release e-book of this novel by the author for review purposes. This has in no way influenced my opinion of the work, and this review is a full, fair and honest accounting of my thoughts on it.

The Maids of Wrath 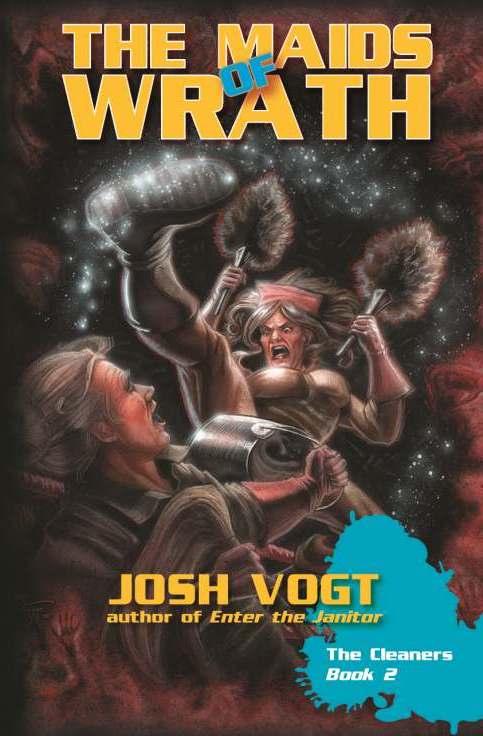 These aren’t your anime-style magical maids…

END_OF_DOCUMENT_TOKEN_TO_BE_REPLACED

Note: Sorry guys, this is way later than I expected it to be. The last couple of months have been a bit of a struggle for me, and I’d found it hard to bring myself to write anything. Pushing myself to get back on track again, and hopefully the fact that I’ve got myself into a bit of a steadier routine should help with that.

Okay, time for another review! This time around we’re looking at the first book in The Cleaners series, Enter the Janitor, by Josh Vogt. You might recognise the name from my review of Forge of Ashes. Forge of Ashes was Josh’s debut novel, with Enter the Janitor hot on its heels. It’s a bit of a genre shift as well, jumping from the fairly traditional fantasy (with some decidedly non-traditional elements) of the Pathfinder Tales line to urban fantasy with a comedic bent.

Anyway, enough preamble. Let’s get into the meat of this.

Ben and Dani, ready to take on the literal scum of the universe…

END_OF_DOCUMENT_TOKEN_TO_BE_REPLACED

Took me a bit longer to finish this book than I hoped. Still, I got there in the end, so it’s time for the my review.

END_OF_DOCUMENT_TOKEN_TO_BE_REPLACED

Well, it’s been a while. No excuses for it, I’ve just been very, very slack on posting. I’m going to try to get myself back to weekly updates, hopefully on Saturdays or Sundays. To make it easy for now, I’m going to start off with book reviews just to get going again.

So on that note, let’s start with a review of the latest Pathfinder Tales novel.

Akina Fairingot, the angriest dwarf on Golarion, prepares to lay a beatdown onto a Forgefiend.

END_OF_DOCUMENT_TOKEN_TO_BE_REPLACED

Alright ladies and gentlemen, it’s book review time! Still working on some other updates, but I thought I’d smash this one out-of-the-way while the book is relatively fresh in my mind. It’ll be a quick one, and free of major spoilers, since I’m kind of pressed for time at the moment. Got a lot of stuff on the go at the moment. If I can, I’ll try to come back and write some more in-depth analysis of the book, but this ought to do to get my opinion of it across.

Anyway, let’s get down to it. 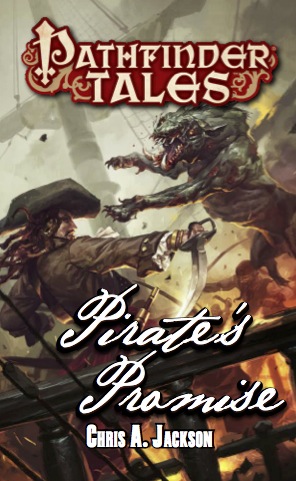 Captain Torius Vin gets ready to throw down against a trollhound

END_OF_DOCUMENT_TOKEN_TO_BE_REPLACED

Alright guys, we’re back with another review.

As I mentioned last time, I’ll be reviewing the latest Pathfinder Tale’s novel, The Redemption Engine.  Please take this as your warning for potential minor spoilers for the novel, because damn it I have to talk about it to review it, now don’t I. Not much else to say really, so let’s just get straight to it. 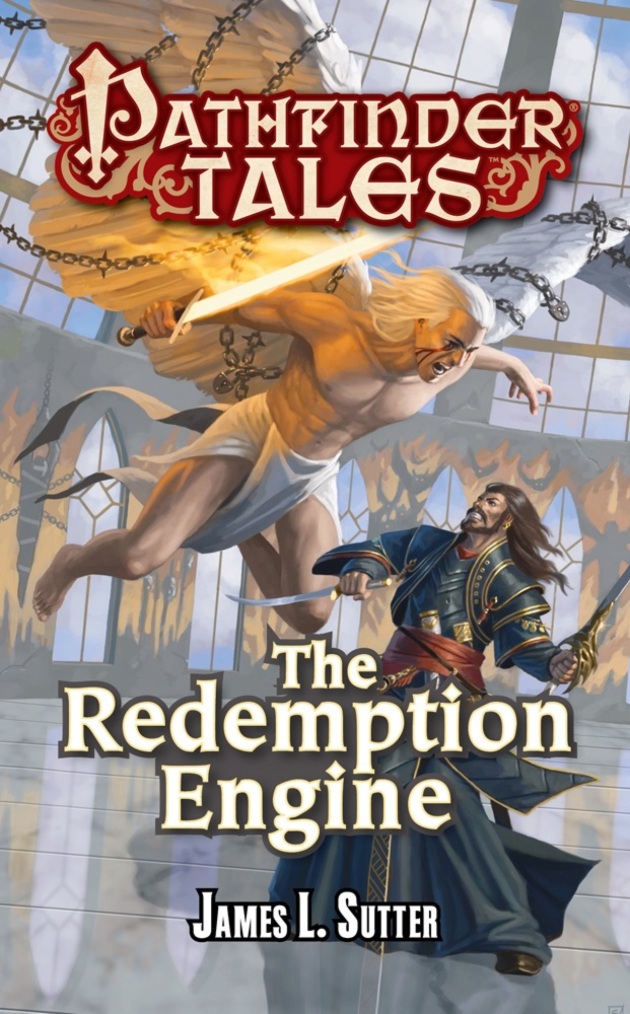 Salim, Pathfinder’s answer to Captain Jack Harkness, faces off against an angel. Wait a second… aren’t angels the good guys? Like, by definition?  What gives?

From the Paizo.com blurb:

When murdered sinners fail to show up in Hell, it’s up to Salim Ghadafar, an atheist warrior forced to solve problems for the goddess of death, to track down the missing souls. In order to do so, Salim will need to descend into the anarchic city of Kaer Maga, following a trail that ranges from Hell’s iron cities to the gates of Heaven itself. Along the way, he’ll be aided by a host of otherworldly creatures, a streetwise teenager, and two warriors of the mysterious Iridian Fold. But when the missing souls are the scum of the earth, and the victims devils themselves, can anyone really be trusted?

END_OF_DOCUMENT_TOKEN_TO_BE_REPLACED

Hey guys. There won’t be a recap of last night’s Reign of Winter session today, because I had to call it off at the last-minute.

My friend Edwin made a valiant effort at stopping a goal in hockey yesterday, but got a high-speed booted kick in the jaw for his trouble (not intentional, the guy was just running hard as he could, and ran straight through Eddie, taking a tumble himself in the process), and his wife is currently out-of-town. So I called Jimbles, let him know what had happened, picked up some Goodberry’s frozen custard and rolled around with a bag of DVDs to keep him company and make sure he was okay.  I think the rest of the group understands, when a friend is hurt and needs you, they take priority. He would have done the same for me if the roles had been reversed… Hell, over the years he’s done things like this for me countless times. The strangest thing about the whole situation though was the song I was listening to when I got his call… I’d been listening to various OSTs all day for inspiration while writing, and decided to swap over to Chevelle’s latest album, La Gárgola. Track 4 had just got through the intro when I got the call. The name of the track? Jawbreaker. Ah Synchronicity, your sense of humour is as gloriously dark as ever.

Anyway, he’s fine now, though still very sore. And I promised an update today, so even though I don’t have a session to recap (and won’t until June, at least not for Pathfinder, as the group have other commitments until then), I had to come up with something for you. Which is when I realised that this is the perfect opportunity to stop thinking about reviews, and actually write some. I’m going to start with something a bit easier to review than source books though, since that involves having to weigh up concepts of game balance, playability and so on. So my first review is going to be for one of the more recent Pathfinder Tales novels, Skinwalkers.