Well, it’s been a while. No excuses for it, I’ve just been very, very slack on posting. I’m going to try to get myself back to weekly updates, hopefully on Saturdays or Sundays. To make it easy for now, I’m going to start off with book reviews just to get going again.

So on that note, let’s start with a review of the latest Pathfinder Tales novel. 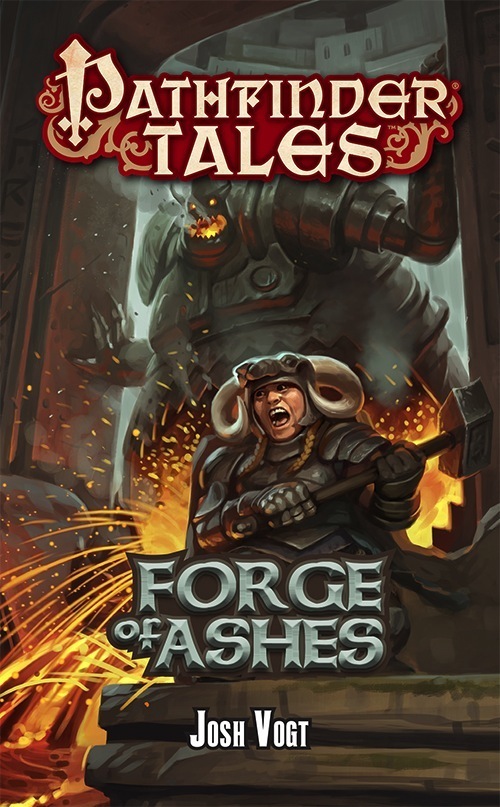 Akina Fairingot, the angriest dwarf on Golarion, prepares to lay a beatdown onto a Forgefiend.

END_OF_DOCUMENT_TOKEN_TO_BE_REPLACED

Hey guys. There won’t be a recap of last night’s Reign of Winter session today, because I had to call it off at the last-minute.

My friend Edwin made a valiant effort at stopping a goal in hockey yesterday, but got a high-speed booted kick in the jaw for his trouble (not intentional, the guy was just running hard as he could, and ran straight through Eddie, taking a tumble himself in the process), and his wife is currently out-of-town. So I called Jimbles, let him know what had happened, picked up some Goodberry’s frozen custard and rolled around with a bag of DVDs to keep him company and make sure he was okay.  I think the rest of the group understands, when a friend is hurt and needs you, they take priority. He would have done the same for me if the roles had been reversed… Hell, over the years he’s done things like this for me countless times. The strangest thing about the whole situation though was the song I was listening to when I got his call… I’d been listening to various OSTs all day for inspiration while writing, and decided to swap over to Chevelle’s latest album, La Gárgola. Track 4 had just got through the intro when I got the call. The name of the track? Jawbreaker. Ah Synchronicity, your sense of humour is as gloriously dark as ever.

Anyway, he’s fine now, though still very sore. And I promised an update today, so even though I don’t have a session to recap (and won’t until June, at least not for Pathfinder, as the group have other commitments until then), I had to come up with something for you. Which is when I realised that this is the perfect opportunity to stop thinking about reviews, and actually write some. I’m going to start with something a bit easier to review than source books though, since that involves having to weigh up concepts of game balance, playability and so on. So my first review is going to be for one of the more recent Pathfinder Tales novels, Skinwalkers.

END_OF_DOCUMENT_TOKEN_TO_BE_REPLACED

So, once again I’m bloody sick. I’m seriously starting to wonder if my body is ever going to completely recover from the series of respiratory tract and chest infections I had during and after my visit to China. I’ve been coughing on and off since then, even after a third round of antibiotics to clear out the last of the infection. Thankfully this time it doesn’t seem to be too bad, though I am more than a little annoyed that I started getting ill the Saturday before a week off on leave. Again with the coughing, but it’s not as nasty as last time. No fever either, just a constant dull ache all over my body. Still, I’m not going to let that stop me from going to see Lindsey Stirling tomorrow night. I’ve been looking forward to this for a month now, and I’ll be damned if illness is going to keep me from it… I’ll just have to stand very quietly at the back and hope there’s some seating available.

Anyway, now that I’ve got my bitching out of the way, it looks like it’s time for another update. As I mentioned last time, this is going to be an introduction to the Reign of Winter campaign that Jimbles is running for me. I was quite excited to have a chance to play in a Pathfinder game, as normally I end up running them, and it’s been a long time since I’ve been able to actually be a player in a D&D 3.5 game, and I’ve never yet been on the player’s side of the GM screen in Pathfinder, apart from once with a group that fell apart within the first session.

END_OF_DOCUMENT_TOKEN_TO_BE_REPLACED

Evening ladies and gentlemen. Tonight’s topic isn’t quite what I had planned, but unfortunately my original topic was kind of jolted out of my head by a near miss I had on the way home from work yesterday. Thankfully I came out of it unscathed, but it was a close one. Without going into too much detail, I’ll just say that having someone decide to change lanes right in front of me on a goddamn roundabout isn’t something I’d call fun, especially in wet weather.