So I saw Guardians of the Galaxy on the weekend… I want to review it. But I don’t know if I can. I honestly can’t think of the words to describe it properly. Everything about it just made me so happy. Once I’ve had a chance to let it all sink in, and maybe seen the movie again (maybe even a few times), I might try to do a proper review. But for now,  I thought I’d throw out some initial thoughts about it. Seriously though, just go watch it. I don’t care if you thought the Guardians didn’t deserve their own film, or how silly you think the concept is, this movie is amazing. This is pretty much entirely spoiler free, except for one major one right at the end of the post (there’s another warning and an image there just to make sure you don’t accidentally see it while reading).

Before we get stuck in though, just a quick note about upcoming stuff. I’ve got five updates for The Unusual Suspects in the works, but it’s going to take a while. Been struggling to get the descriptions written, and these aren’t my characters, so I’m waiting on some details for some of them. Still, hopefully I’ll have the first one up within the next week. Moving on… 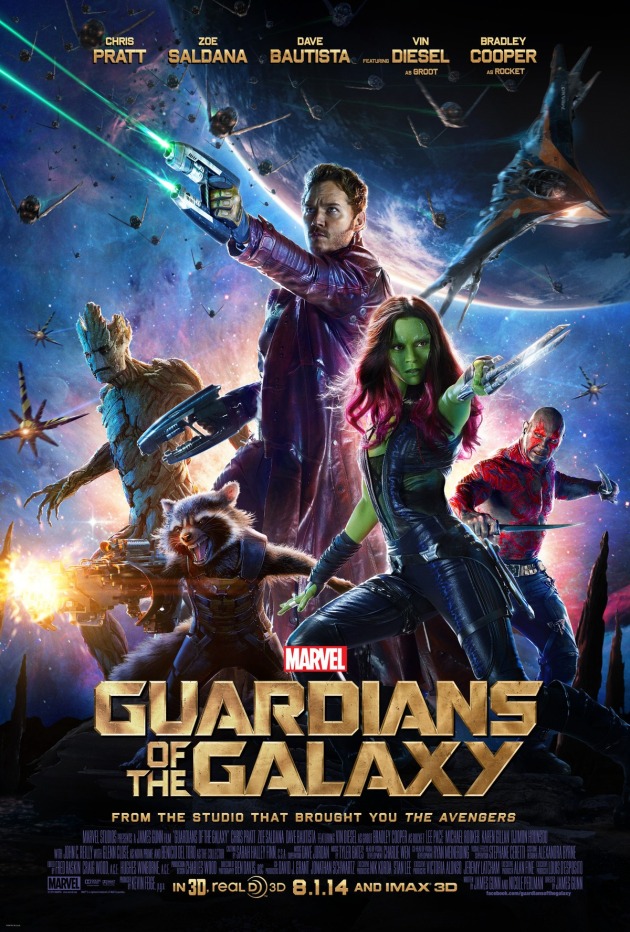 Man, even just seeing that poster makes me so happy.

Casting: Only going to talk about the main characters here.  Chris Pratt was adorably silly and loveable but had his moments of seriousness; Zoe Saldana was wonderful as Gamora (and on a side note, it was nice to see they didn’t shoehorn in a nude scene for no reason); Dave Bautista played Drax as a great mix of melancholy and unintentionally comical; and Bradley Cooper as the voice of Rocket was something else entirely. I mean, the depth he managed to bring to that character, showing that he’s more than just a talking racoon who happens to be a nutjob with a fixation on big guns. Then there’s Groot. I don’t care that pretty much all he says is “I am Groot”, with varying inflections depending on the context, Vin Diesel completely nailed it, and with the few words he was given to work with managed to hit me right in the feels (probably unsurprising to those who remember his role as the Iron Giant around fifteen years ago). Lee Pace was surprisingly dark in his role as Ronan the Accuser for the overall tone of the movie, but it worked really well. Karen Gillan… well, I’m more used to seeing her as Amy Pond, the adorable red-headed companion of Matt Smith’s incarnation of Doctor Who, but damn if she wasn’t fantastic as Nebula, the cyborg killing machine. Also very blue, and very bald. Yet still sexy somehow… is that weird? I guess it’s a little weird. But whatever.

Story: Easiest way to explain my thoughts on this is to use the Avengers film as a comparison. Avengers was very much a serious movie with moments of comedy, and the characters are heroes from the start. Guardians of the Galaxy on the other hand is a straight up comedy with moments of surprising emotional depth and seriousness. It throws you a bunch of criminals who, while very likable, aren’t exactly all about Truth, Justice and the American Way, then shows their gradual transition into Big Damn Heroes or, at the very least, Big Damn Anti-Heroes. It’s violent, it’s funny, it’s clever, and it’s extremely well told.

Visuals: It’s gorgeous. Everything about it is just beautiful to look at, even the occasional horrible stuff. I can’t really say much more. Total feast for the eyes sums it up nicely I guess.

Conclusion: Without a doubt, this is my favourite film in the Marvel Cinematic Universe so far, and I’m unbelievably happy that they’ve already confirmed a sequel. Oh all the other films have been great (I’m ignoring even Edward Norton’s Hulk here, I’ll admit there’s an MCU Hulk film when they give us one with Mark Ruffalo in it), but they’ve all been fairly serious stories with characters who are, as I said before, undoubtedly heroes (okay, Tony Stark may be a jerk sometimes, but he’s still an unequivocally good guy). It was refreshing to have a bunch of anti-heroes just bantering with each other as they bumbled around trying to figure out what to do. I have to admit, I’m glad I sprung for the premium tickets. It was great being able to lie back in a recliner, have people bring me wine and cocktails and food throughout the film, and just lose myself in the spectacle. I laughed, I rooted for the good(ish) guys, I gripped the edge of my seat where appropriate… and I cried. That’s right. I cried. I’m not ashamed to admit it, and anyone who’s seen the movie can probably take a pretty bloody good guess at where I lost it. I bloody well defy anyone to see that movie, get to that scene, and not feel at least a tear welling up!

SPOILERS BELOW THIS IMAGE! 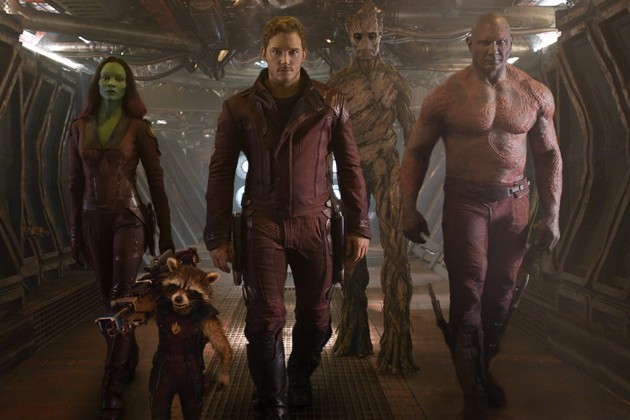 They may be criminals, but I love them anyway…

For anyone who can’t work it out, or doesn’t mind spoilers, the scene that made me cry is pretty late in the film. The ship that the team is in is going to crash, and in order to save them, Groot turns himself into a cage to protect them… when Rocket realises what’s happening, he pleads with Groot to not do it. I may have the lines a little wrong here, as I was a bit tipsy by this stage, but it goes something like this…

Rocket: Groot, no… you’ll die! Why are you doing this…
Groot: We… are… Groot

Holy shit guys, that scene just sucker-punched me right in the feels. I mean Groot hasn’t said anything beyond his trademark “I am Groot” the whole way through the film, and he so clearly wanted to say “We are friends” to Rocket, but couldn’t get that last word out. Even thinking about it now, I’m feeling like I’m going to tear up.

Written while listening to A Sound Mind. They’re an Australian band who unfortunately only ever released one album, Harmonia. I was lucky enough to see them when they were in Canberra one time, they were selling their album on the street after I’d finished my training course and was catching up with some friends… some random guy comes up, asks if I like music, then shoved some headphones at me. Had a listen, bought the album, and they threw in tickets to the gig that night. They’re a mix of rock, synth and pop, with some really uplifting lyrics. It’s not all non-stop happy joy, but the general theme is less “Life sucks” and more “Life may not be great right now, but hold yourself up and things will change for the better”.  I did just find out that it looks like the band members have split off and created two separate bands, PLUDO and Capio, so I’ll be tracking down some of their stuff for a listen very soon.