Update: I’ve received the picture I ordered of Varian. I think it’s turned out really well, and I’ve added it to the post. For details on the artist, see the miscellaneous information section below.

Well ladies and gentlemen, I’m back. I’ve actually been back from down the coast for a while now, but have been run ragged by training my replacement at work, settling into my new role, and getting back into the gym. Throw in a bit of illness over the last few days, and I’m wrecked.

To top it all off, the work I’d done on finishing off the back story and so on for Norva Wintarius was lost when my computer crashed while I was writing it up. Combined with the fact that the friend I built that character for has now dropped out of my Skulls & Shackles game (meaning Norva got only one appearance as a PC), I’ve kind of lost interest in finishing her off for now. I still plan on going back and fixing it up at some point, because I really like the character concept, but it won’t be for a while.

Instead, I’m moving onto the second installment of The Unusual Suspects. This time around we’re going to take a look at my character from a weekly World of Darkness game I play in.

END_OF_DOCUMENT_TOKEN_TO_BE_REPLACED

Note: This update is as yet unfinished. I did intend to have it up last week, but it’s been unbelievably hectic for me lately, with a trip to Sydney to see Alestorm, someone managing to damage my scooter to the point that I had to take it in for repairs, and trying to finish off work stuff before I take a week off. As I am away for the next week, and I don’t know if I’m going to have any internet access where I am, I’m going to post what I’ve got for this update so far. I’ll be coming back to finish this off at some point in the next fortnight, hopefully by the end of next weekend.

Well, it took a bit longer than I’d hoped, but I’m finally ready to get started on a new series for the blog. Welcome to the first installment of The Unusual Suspects. Each update will focus on a different character that I have created, whether it’s one of my own player characters, a non-player character or a PC I’ve created for one of my friends to use. After a description of the character and a summary of their personality and backstory, I’ll go into detail on the build, including:

I’m also in the midst of arranging for a friend of mine to do some character artwork for these updates, but at the moment there’s no timeframe for when that will happen. When it does, then I’ll try to get artwork done for the earlier pieces and come back to update them.

So, now that we’ve got the introduction out of the way, let’s get started. The first character I wanted to introduce is a recent creation, and has only seen a little bit of play. So let’s take a look at…

END_OF_DOCUMENT_TOKEN_TO_BE_REPLACED

Warning: This update doesn’t really have a whole lot to do with gaming. There are some mentions of it here and there.

I’m sure most readers people reading this will recognise the title of this update as a reference to Pink Floyd’s song Time. For anyone who doesn’t know it, the full verse is as follows:

And you run and you run to catch up with the sun, but it’s sinking
Racing around to come up behind you again
The sun is the same in a relative way, but you’re older
Shorter of breath and one day closer to death

END_OF_DOCUMENT_TOKEN_TO_BE_REPLACED

Welcome back to Cooking the Cosmos. My apologies for the extended delay on getting this posted, over the last few days my internet access has been incredibly unreliable, and I ended up frustrated to the point of giving up until it decided to start playing nice again. Now that the worst of it appears to be over, I figure it’s time to get back in business.

As I said last time, this update will focus on choosing a system for your campaign setting. I find that it’s best to choose a system as early as you possible, as it gives you a framework of game mechanics to build within. There are three major questions to consider when making this decision, so I’ll be using both the Project Helleborus and Urban Magic campaign settings to help demonstrate the process.

END_OF_DOCUMENT_TOKEN_TO_BE_REPLACED

I know it’s a bit late, but merry Christmas to all! I hope everyone had an excellent time with friends and family, and had plenty of good food and drink. I did intend to have this and the next part of Cooking the Cosmos posted before Christmas, but unfortunately I ran out of time, what with preparations for the shutdown period at work, and needing to travel to visit my family. Still, on the plus side, since this is now a post-Christmas update, I can say thank you to everyone for the awesome loot I received. All of my gifts were thoughtful and much appreciated, but I’d like to give special thanks to the following people for presents that were extra special to me: 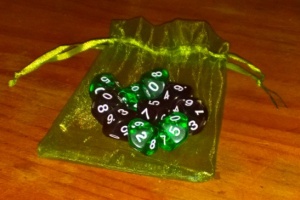 My new World of Darkness dice. Thanks Elena!

END_OF_DOCUMENT_TOKEN_TO_BE_REPLACED

Hey guys, welcome to Part 2 of Cooking the Cosmos, my series about world building for role-playing games.

I’ll be kicking this update off by creating a second campaign setting to use as an example throughout this series. After that I’ll discuss ways to expand on the details of your setting, and deciding on what you want your characters to focus on when first introduced to the world.

So, first up, let’s get another campaign setting going here. I’ve decided that I’d like to move away from the fairly traditional fantasy setting that I am using for Project Helleborus. I’ll still be using fantasy, but I’m looking at a modern-day urban fantasy setting, inspired by the Urban Magic series by Kate Griffin. I can not recommend this series highly enough, if anyone is interested in giving it a read please see the end of this post for more information.

Concept: A modern-day city with a hidden society of magic users and supernatural creatures. Magic has adapted to modern society, drawing power from industry and society rather than from nature.

Now for a quick back story:

Magic has always been a part of the world, hidden from mainstream society. However, magic as a force is a mirror of the state of humanity and its environment. The shift from a rural society to urban living has had severe effects on the nature of magic and the methods used by practitioners. Where once sorcerers would summon vines to entangle their enemies, now they summon barbed wire. The herbs once used for warding away ill intent have been replaced with a spray painted image of a stop sign.

In the hidden magic societies within each city, there is a truce between the various tribes and clans of practitioners, as well as the supernatural creatures. However, relationships are strained, and small flare-ups are common. Sitting outside of all of this are the sorcerers, the rare natural adepts who are born with magic in their veins. They belong to no clan, but are respected, and often feared, as their powers are unpredictable and near unimaginable. Now though, someone is hunting down the sorcerers, and drawing together lesser magic users using fear and the promise of power.  Those who resist, die.

I’ll be coming back to this setting whenever I need something to use as a comparison or contrast for Project Helleborus. For now though, I’ll leave it as is and move onto demonstrating start fleshing out the details for your world.

END_OF_DOCUMENT_TOKEN_TO_BE_REPLACED

Welcome to Cooking the Cosmos, a series of articles about creating your own campaign setting, a process commonly referred to as World Building. This will be updating on a semi-regular basis, with hopefully at least one or two articles added each month.

For the first two or three updates, we’ll be starting with the basics, namely, coming up with a concept and basic outline; choosing a system; and starting to develop the ideas. To help demonstrate what I’m talking about, I’ll be using two example settings with different themes. The first of these is a setting I am already developing for a home game, under the working title Project Helleborus. The second will be a new world that I create specifically for the purposes of these articles. As the articles continue, I will ask for input from any interested readers who would like to help shape the second setting.

Disclaimer: The views and opinions discussed below are entirely my own, and may not work for you. This is just how I work when it comes to designing a world for my players, but there are many ways to go about it, and none of them are the “wrong” way.