Okay, so this is over a year overdue. I’m terrible, I know.

But let’s see this as an example of time teaching you, and making a fool of your past self.

In this time, I attended another Phenomenon in Canberra (And took away their drama Triptytch award with a group of people I had never met before.) and even ran my first game for the greater Canberra roleplaying community. All in all, another fantastic year.

Why competitive roleplaying? This genre is built around making a story as a team! Guiding these semi-real entities through trials both emotional and physical! Wouldn’t adding a competitive edge ruin it? Wouldn’t the ever present thought of “Am I doing this well enough to get an award?” ruin your immersion?

Well, no. First of all, your GM is likely to be running multiple sessions of their game (Even I did, and it was my first year.) and with premade characters, there is bound to be a player or a group who has an interpretation that matches their inital designs. Us GMs do enjoy a bit of ego stroking; if a player can find interest in characters we created enough to perfectly encapsulate them in their performance then it is only natural to have a preference.

On the other hand, if someone takes a character in a completely new direction that surprises and excites the GM, this could also endear the player to them. Surprising someone who has run a particular scenario up to 11 times already is a feat worthy of recognition. Especially if this interpretation is better than what they initially envisioned.

Let’s get something clear, you are never competing against the people you’re weaving a story with. These competitive games at Phenomenon are collaborative, so you are building a story with the GM and the other players, usually-but-not-always using a rules light or no rules system. Unlike a more rigid game like Pathfinder, the ever present urge for optimization and survivability is absent. If you can’t fail because someone isn’t pulling their weight, then you’re without THAT form of competition against your fellow players.

Lastly; and most importantly comes the phrase I hear most often when describing the Perpetual games.

“But that’s rediculous, how do you score a “Winner” of rules-light or systemless games?”

Easy! These are drama or comedy games. You can use a very simple “Who made me feel/laugh the most?” metric. You could add points for anyone who has a highly quotable line, and remove them for anyone who keeps breaking character. As well as the interpretation idea I explored above.

This does mean that it comes down to more Romanticism than Enlightenment, but I’m okay with that. The kind of games that flourish under plot and characterization heavy settings don’t often come with a clear mathematical “Winner” anyway. You’re gonna have an emotional favourite anyway.

Picture of the winning team: Shiny Things and me, from Cardgames on Motorcycles. 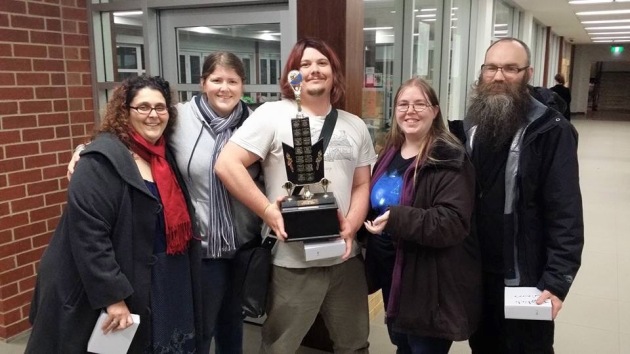